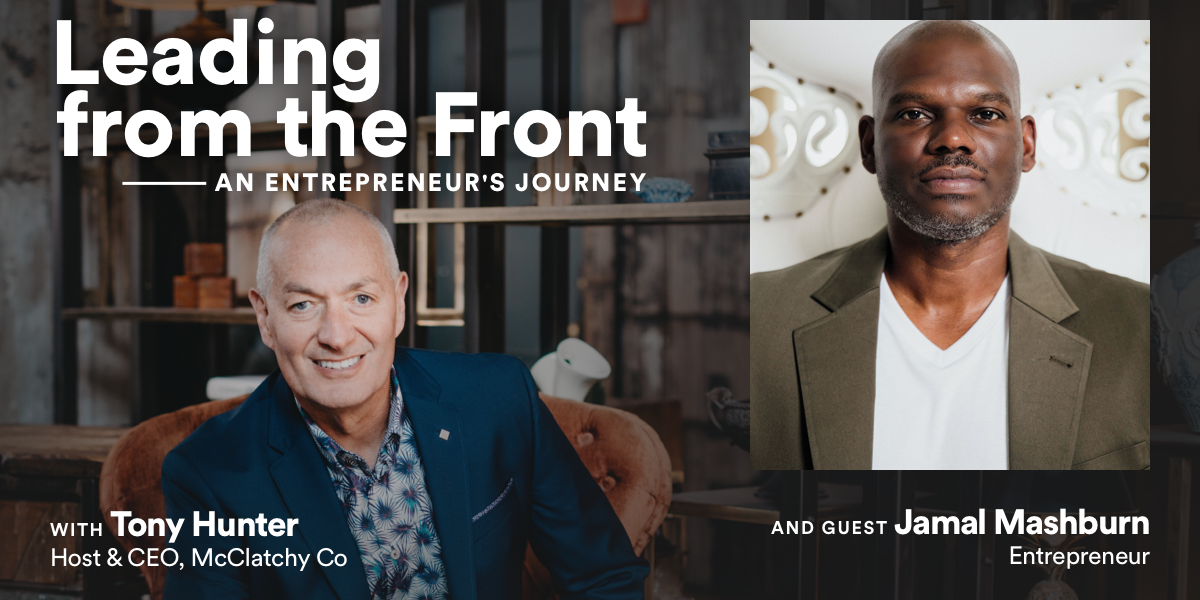 At 10, Jamal Mashburn knew he was destined for great things. His life has certainly panned out that way. A successful career in the NBA led to an equally successful business career as a multi-faceted entrepreneur. But the seeds for his extraordinary story were built early, in Harlem, New York.

His father was a professional boxer. His mother was an accountant for the New York City Housing Authority, and she used the city of New York as a tool to expose him to different cultures, ideas and ways of life.

It began on the train. He rode it back and forth every day to Catholic school. Watching the train transition from Harlem commuters to the briefcase carrying professionals downtown, Jamal always wondered: What was in the briefcase?

Your foundation matters, but you have to build on it

“Years later I found out a lot of guys don’t have anything in the briefcase,” he joked. “But it allowed me to dream beyond my neighborhood and beyond athletics, and utilize athletics as the bridge to entrepreneurship and leadership.”

Jamal was greatly influenced by his mother, and so was I. They preached: Aim higher. Do your best. Work hard. You can achieve greatness. That foundation, the values that it established, has been critical to my success. Of course, you will experience some adversity along the way — I call it the school of hard knocks — and people will try to pin you down, put you in a box. But I didn’t have to navigate quite the same path as Jamal did, as a 6’8” Black man.

When it comes to stereotypes, Jamal will tell you that some blessings are indeed a curse, but as is typical of his preference for the positive, he also says that curses can be a blessing. Wanting to carry that metaphoric briefcase gave him the will to challenge the idea of him as a “dumb jock” — and win.

“Sports is something I did, and I’m thankful for that journey,” he said. “It taught me a lot: time management, discipline, being able to pivot on a dime, dealing with new teammates, how to evaluate and assess organizations, and how to understand the whole market. The NBA is a multi-billion dollar industry. I had to pull from those experiences to leapfrog into the business world, and transition other people’s mindsets of what they thought of me.”

For instance, Jamal has a wonderful story about his work on the advisory board for Toyota. He owns a number of dealerships, and many years ago, while on a cultural trip to Japan for dealership owners, he realized that he needed to connect differently with President Akio Toyoda.

You teach people how to treat you

Toyoda saw Jamal the athlete, and his conversation was all about the NBA. Jamal wanted more. So, at a lunch meeting he began to talk about the customer satisfaction score data he acquired after every customer transaction to get a better understanding of their experience and how his dealership could improve.

“I equated that with my autograph,” he said. “Every time a kid asks me for my autograph I sign. That’s my customer satisfaction score. [Toyoda] said, “tell me more.” I said, if I sign, the kid has a personal experience with me, not just the team, or watching the game.

“He becomes a fan, and he wants to come back to more games or buy more merchandise. That’s a different way for me to engage my customer. Now [Toyoda] knew that I understood the car business,” Jamal explained. “Since then he rarely talks about basketball when we speak.”

That is true leadership: Demonstrate expertise and knowledge to break down a barrier, and make a valuable connection. It’s emblematic of Jamal’s leadership style, which focuses on tenets like listening, empowering your team, accountability, and self-leadership.

He is also a servant leader in that, his focus is on people first, project second. When you lead from the front, you start with the people, and a servant leader will never ask more of his people than he is prepared to do himself.

Everyone has something to teach us

Jamal is an expert at wrapping his athletics experience around his work as a businessman. The two are so well integrated, it’s as if one fuels the other, and in some ways it does. For instance, culture is extremely important to him. In that we agree; culture can make or break a business, and culture is at its core all about people.

Jamal credits his mother, among others, with helping to shape his leadership style. She emphasized self leadership, urging him to not let his environment impact him negatively. Instead, he was to walk into every room standing tall, not just physically, but spiritually and intellectually.

He said his father taught him what not to do, which is also a very important lesson for a leader. We must learn from others’ mistakes, allow them to share the tolls they’ve paid, and then use that information to strengthen our own mission and goals.

He said Rick Pitino, his coach while at the University of Kentucky, taught him how: to assess and develop talent, to motivate individuals to reach heights they didn’t think it was possible to reach, how you can use someone’s history, even their traumas to move them forward. Pitino also taught him the value of sacrifice when he urged Jamal to leave college — and their winning team — early for the NBA. “He prioritized my interests,” Jamal said. “He knew who I was. A lot of people aren’t willing to make that sacrifice.”

Playing professional basketball taught him the value of being relevant, and versatile. He said the most important thing on a basketball court is not shots made or missed, but how many minutes you actually play. His varied interests in publishing, cars, technology, even pizza, are the result of his ability to identify viable markets and opportunities — all of which evolved from his basketball career.

“The ability to identify adjacent opportunities comes from looking at different angles,” he explained. “Where are the opportunities? The more versatile I am, the harder it is to pull me off the court. That’s how I look at business opportunities.”

A master class in leadership

Jamal’s message to those who are on the cusp of emerging as key leaders in their companies and communities: Don’t make it complicated. Get down to the nitty gritty: What are your core values?

Be honest. Look yourself in the mirror, and decide who you are. “What do you stand for? Then put yourself in that particular space,” he said.

Jamal’s career, the lessons by which he lives his life and runs his business, are like a master’s class in leadership. By example, he’s shown us how to access every resource, whether that’s capital, people, or lessons, then build a trusted team of supportive individuals. He’s taught others that as a leader it’s okay to be vulnerable, to rely on others, or to say, “I don’t know.” Then have the courage to ask questions, and learn what you don’t know.

People might look at Jamal Mashburn and think his success is based on his talent. I see work ethic, humility, and the sacrifice he’s put in along the way to achieve greatness — on and off the court. Those things are a good “playbook” for others to follow.

Jamal Mashburn is a servant leader, a mission driven businessman, and a leader who understands and embraces the importance of culture and people. Those attributes are among the many reasons I’m proud to call him my friend, and colleague.

To listen to our Leading From the Front interview, please click here.

Leading from the Front: Rosina Racioppi